Uncle Nearest 1856 has a caramel color with a beautiful deep golden hue. Baled hay and pumpkin seeds on the nose with subtle notes of ripe stone fruit and caramel corn. Bold and spicy upfront then mellows with sweet caramel and maple, like biting into an oatmeal raisin cookie. The finish is long and rich. It lingers pleasantly sweet on the palate with notes of vanilla after the spice dissipates.

Spicy caramel up front with the proof, hints of maple then mellows with dried fruit and floral notes. Sweetness and spice reminiscent of freshly baked oatmeal raisin cookies.

Long and rich finish, lingers pleasantly sweet on the palate, notes of vanilla.

Find Near Me Shop Online

MOST-AWARDED AMERICAN WHISKEY OR BOURBON OF 2019 AND 2020

THE STORY OF NEAREST GREEN

Narrated by Emmy-Award winning actor Jeffrey Wright, this beautifully shot short film, telling the story of the first known African-American master distiller, is about much more than whiskey. It is a story of honor, respect, and an unlikely friendship that could be the greatest American story you never heard.

Uncle Nearest Premium Whiskey is inspired by the best whiskey-maker the world never knew, the first known African-American master distiller, Nathan “Nearest” Green. The Uncle Nearest brand, wholly owned by Uncle Nearest, Inc., an all minority-led business, encompasses a premium aged whiskey with a blend of 8- to 14- year old, an 11-year-old minimum age single barrel, and a 7-year-old small batch offering, all mellowed using the Lincoln County Process, a unique filtering of bourbon through sugar maple charcoal. This process has been confirmed to have been brought to Tennessee by enslaved people and taught by Nearest Green to the most famous Tennessee Whiskey maker of all time. Uncle Nearest is distilled, aged, bottled and hand-labeled in Tennessee.

The company built its brand on its knack for sourcing the best of Tennessee whiskies and bourbons, and using its own non-temperature-controlled aging process and unique post-aging double filtration method that significantly changes the characteristics and profile of the original whiskies. Uncle Nearest is the most awarded new American premium whiskey brand in United States history, garnering 75 awards since its July 2017 debut, including being one of two brands named “World’s Best” at Whisky Magazine’s 2019 World Whiskies Awards, and earning 15 Best in Class. Cigar & Spirits Magazine also named Uncle Nearest one of the “Top 5 Whiskies in the World.”

The whiskey is currently available in all 50 states and 12 countries (while shipping into a total of 148 countries), in more than 10,000 stores, bars, restaurants and its 270-acre distillery in Shelbyville, Tenn., dubbed by a member of the press as “Malt Disney World.”

Do I Love You (Indeed I Do)

Don't see Uncle Nearest near you? Have it delivered right to your door! 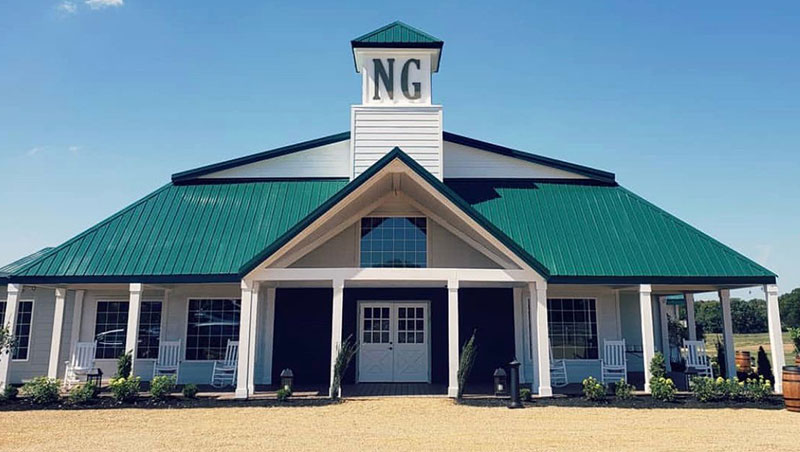 Sign-up for our next Tasting and Hard Hat Tour. 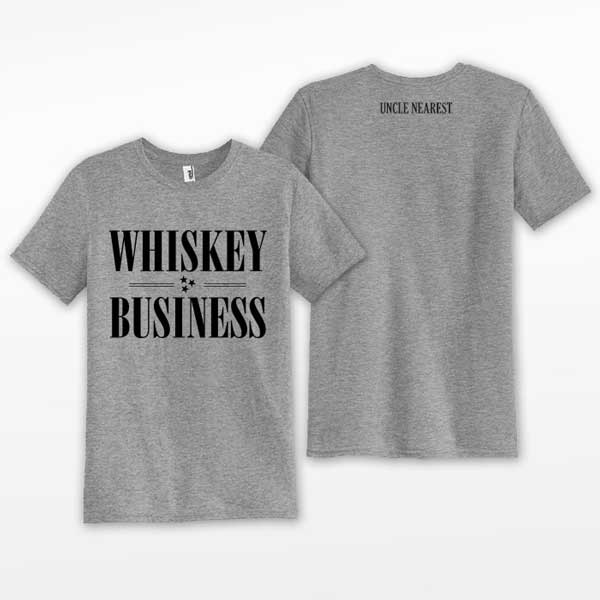 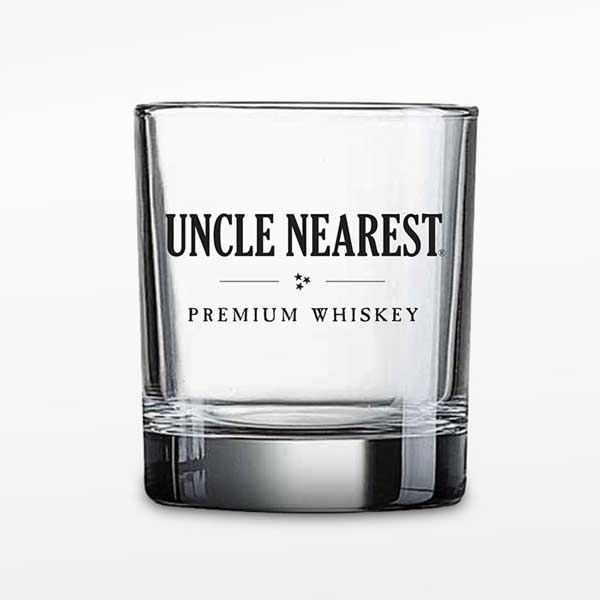 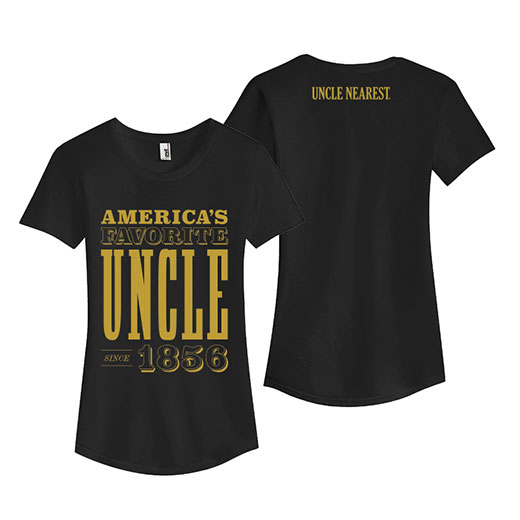 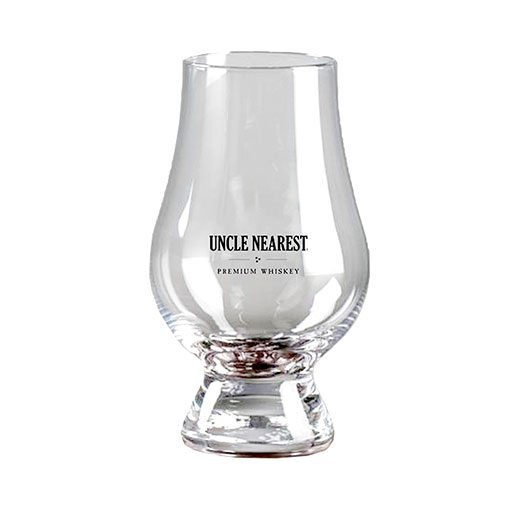 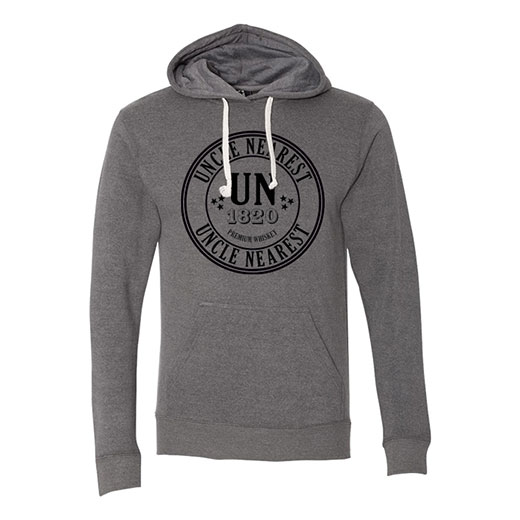 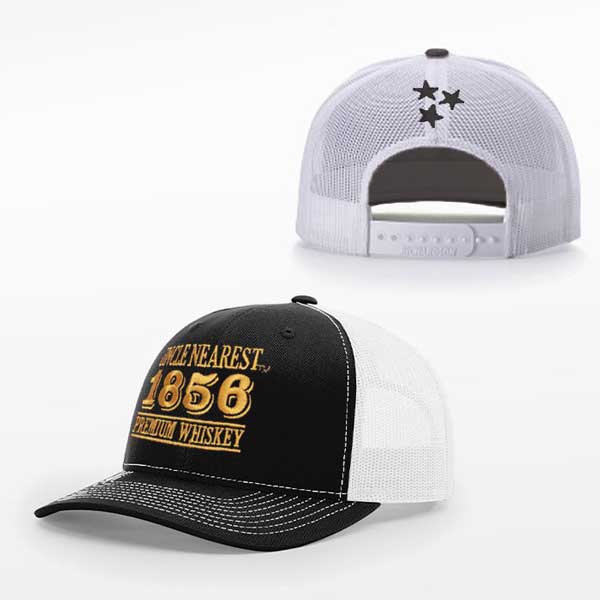 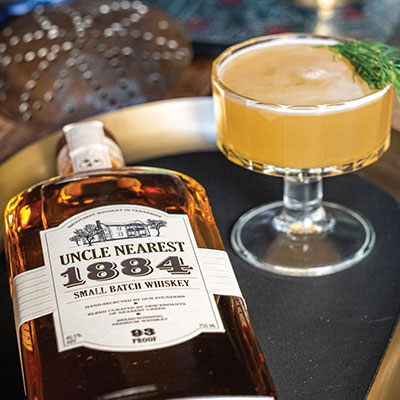 Add all ingredients to a cocktail shaker with ice. Shake vigorously for 8-10 seconds. Rinse a chilled cocktail glass with a small amount of absinthe. Strain cocktail into glass. Garnish with a sprig of dill.

Sarsaparilla has both savory and sweet applications and is enhanced by mint. Emma’s background as a cook definitely came through in this syrup! 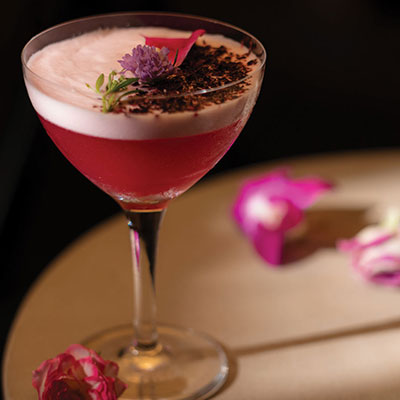 Add first four ingredients to a cocktail shaker without ice. Shake vigorously for 8-10 seconds. Add ice and shake again. Strain into a chilled cocktail glass. Sprinkle purple corn dust over half of the cocktail. Place edible flowers down a line in the center.

Chicha Morada is a traditional punch-like beverage originating in Peru. It is made by boiling dried purple corn, pineapple skin, apples, cinnamon, cloves, water, and sugar. 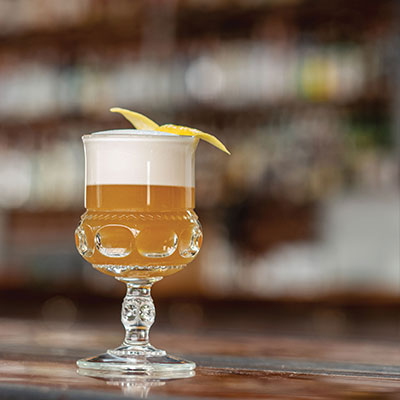 Combine all ingredients in a cocktail shaker without ice. Shake vigorously for 8-10 seconds. Add ice and shake again. Strain into a chilled cocktail glass. Garnish with a lemon twist.

Inspired by Rob’s relationship with his father and his role as a new parent. He hopes to leave behind a legacy demonstrating that compassion, conversation, and a willingness to be open towards people and ideas, are fundamental for unity. 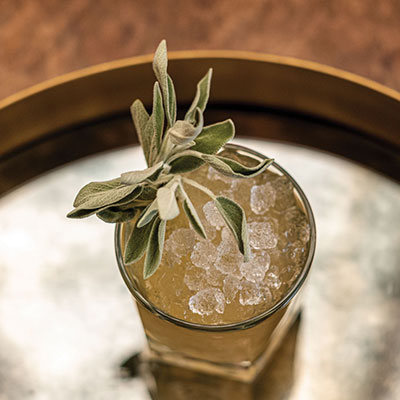 Add whiskey and 4 sage leaves to a cocktail shaker and muddle gently. Add remaining ingredients (except sage sprig) and ice. Shake vigorously for 10 seconds. Strain into a chilled rocks glass. Fill with crushed ice. Garnish with a toasted sage sprig.

Inspired by the female family members in Chandler’s life who continued to create opportunities for themselves regardless of the adversity they faced. 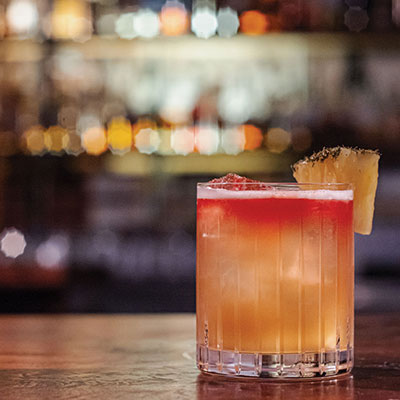 Combine first four ingredients in a cocktail shaker with a large cube and shake for 8-10 seconds. Strain into a rocks glass with a matcha and honey large ice cube. Top with a splash of soda water and 5 heavy dashes of Peychaud’s. Garnish with a dill crusted pineapple wedge and slightly toast it to caramelize the pineapple and bring out the aromatics.

Zerizut is Hebrew for “alacrity”, or “perseverance.” Toso means “struggle” in Japanese. This cocktail honors the legacy of Dylan’s Jewish American and Japanese American family and their ability to persevere through trials and tribulations, emerging better on the other side. 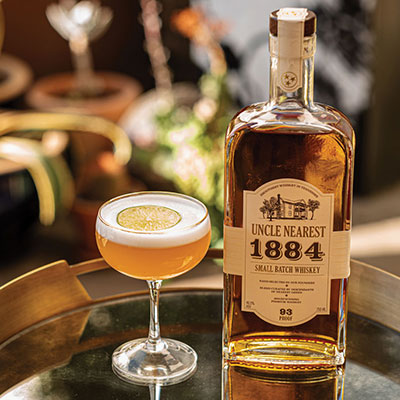 Add all ingredients to a cocktail shaker with ice. Shake for 8-10 seconds. Double strain into a chilled coupe glass. Garnish with fresh peach slice.

Liquid smoke highlights the grilled flavor of this peach syrup, vanilla gives depth to the sweetness, while ginger gives it a little tang to balance things out. 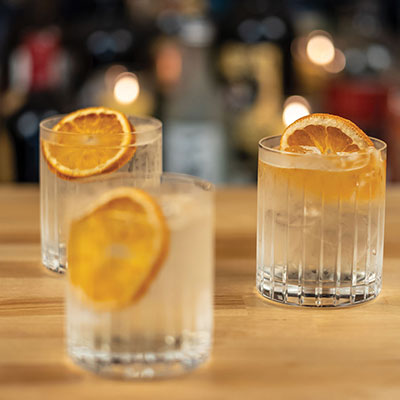 For non-clarified, on-the-fly version, combine all ingredients in a cocktail shaker with ice and shake for 8-10 seconds. Strain into a chilled coupe glass. Garnish with a dehydrated orange. Enjoy!

Milk clarification is a cocktail technique in which an acidic ingredient is used to curdle milk, separating it into curds and whey. The curd clumps act as filters that trap particulates, so that when a cloudy liquid is poured through them (such as a cocktail with citrus juice that curdled the milk) it comes out clear. 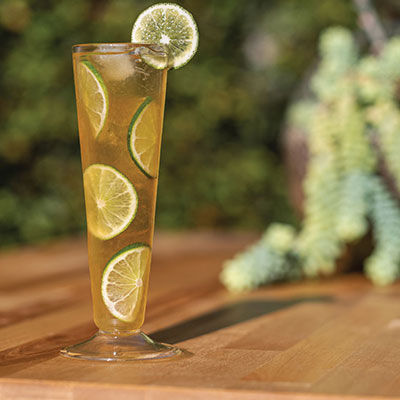 A sustainable cocktail using an ingredient usually regarded as trash! This cocktail is inspired by Kim’s legacy of implementing ways to be less wasteful, more imaginative and resourceful by using ingredients to their fullest potential behind the bar and in life. 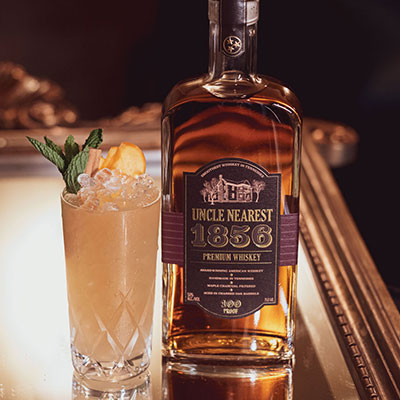 Muddle peach and lemon in a cocktail shaker. Add liquid ingredients. Add a few pieces of crushed ice and shake until cold. Strain into a chilled highball glass. Add crushed ice and garnish with mint sprig, grated cinnamon and slices of peach.

Honoring Anastasia’s Georgia roots, she paired whiskey, peaches and pecans by infusing our delicious Uncle Nearest 1856 with pecans, as well as using a homemade pecan orgeat. 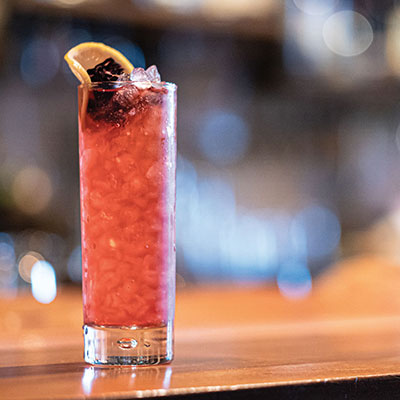 Combine all ingredients except the hibiscus syrup in a cocktail shaker with ice. Shake for 8-10 seconds and strain over crushed ice into a collins glass. Float hibiscus syrup on top and garnish with beautyberry cluster. If you can’t find beautyberries (native to Texas), garnish with a lemon wheel.

American beautyberry grows in rich woods and thickets in Central and East Texas, especially in the coastal plain pinelands. It has clusters of beautiful purple berries clinging to the branches in late summer through fall. 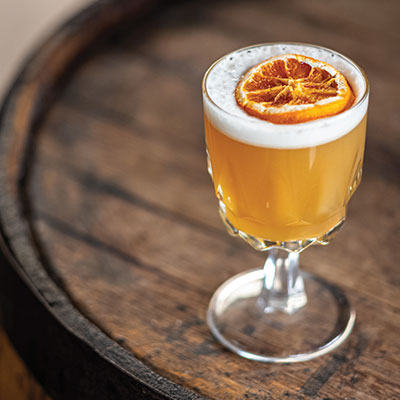 What is Aquafaba? It is the liquid leftover from cooked chickpeas! You can get it by draining a can of chickpeas and retaining the liquid. Due to its ability to mimic functional properties of egg whites in cooking, aquafaba can be used as a direct replacement for them in some cases. 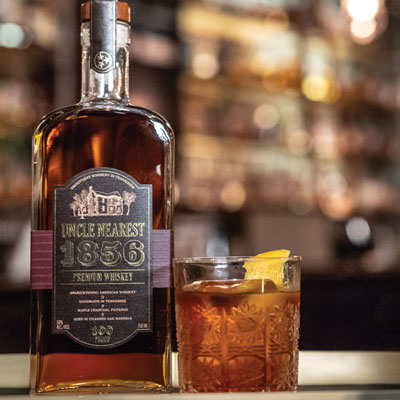 Add all liquid ingredients to a mixing glass with ice. Stir until cold. Pour into cinnamon, chicory & cedar smoked glass over one large cube. Garnish with an expressed lemon peel.

To smoke the glass, take a cedar plank and place a small amount of ground chicory root and 1/2 a cinnamon stick on the board. Using a creme brûlée torch, burn the chicory and cinnamon until smoking and place a double old-fashioned glass over them to capture the smoke.

Be the first to know when our next barrel of 1820 will go on sale, learn about distillery updates
and more!

Are you of legal drinking age?